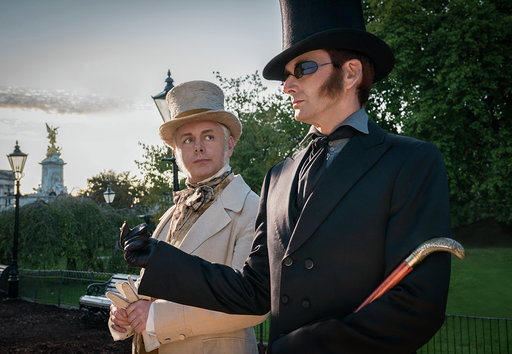 At least two tie-in books are set to be published on the same day as Amazon’s adaptation of Good Omens launches.

The series, starring Michael Sheen and David Tennant, is based on the book by Terry Pratchett and Neil Gaiman. It will be released on Amazon Prime on 31st May.

Gaiman’s screenplay, The Quite Nice and Fairly Accurate Good Omens Script Book, will feature a foreword and commentary by him, including deleted scenes.

The Nice and Accurate Good Omens TV Companion provides behind-the-scenes insight into the making of the show, in-depth interviews, photographs, costume boards and set designs. Writer Matt Whyman had extensive access to the TV set and the people who worked on the show.

Both books will be published on 31st May.

Gaiman said: “Making Good Omens, Terry Pratchett’s and my novel, into a television series was an extraordinary undertaking – one that requires hundreds of actors and crew and assorted people of amazing talents. I’m thrilled that [publishers] Headline will be helping bring people behind the scenes, to see how the magic was made. They’ll read a story that’s familiar and also new, and learn how we did it.”