The start of a new year always prompts me to take a look at some of the cinematic offerings our local multiplexes will have on offer over the next 12 months.

This is a rundown of the film’s I’m looking forward to in the coming year. NB, I’ve only chosen films which have confirmed UK release dates.

From Captain America v Iron Man to the first Star Wars spin-off via Emma Stone and Ryan Gosling in a musical, hopefully there’s a film here to pique your interest.

One of this year’s big Oscar hopefuls, The Big Short features an all-star cast including Christian Bale, Steve Carell and Brad Pitt. Directed by Adam McKay, better known for his comedy work, the film looks at the recent financial crisis.

Another big ensemble drama, this time about the journalists of the Boston Globe who revealed the dark secrets of the Catholic Church in the city. Michael Keaton, Mark Ruffalo, Rachel McAdams and Liev Schreiber lead the cast. It’s very high on my must-watch list for the new year.

Bryan Cranston stars as Dalton Trumbo, in 1947 he was Hollywood’s leading screenwriter, until he was jailed and blacklisted for his political beliefs. Diane Ladd and Helen Mirren co-star. After winning Emmys and a Tony, could Cranston add an Oscar to his haul?

The Coen Brothers return with this comedy set in Hollywood during the 1950s following a fixer whose job it is to keep a film studio’s stars in check. The cast includes George Clooney, Channing Tatum, Josh Brolin, Scarlett Johansson, Ralph Fiennes and many more. Here’s the new TV advert:

To be honest I was left somewhat underwhelmed by Avengers: Age of Ultron so I’m hoping the third Cap movie will restore balance in the Marvel universe. Both Avengers films have been building to this showdown between Cap and Iron Man – I just hope it lives up to expectations. And Martin Freeman’s in it!

George Clooney and Julia Roberts reunite for this thriller directed by Jodie Foster. With three Oscar winners attached you’ve got to hope this will be one of the stand-out films of the year. Clooney plays a TV financial tipster who is taken hostage by a viewer live on air when one of his tips goes wrong. Roberts plays his formidable producer.

Whiplash director Damien Chazelle is back with his new film, a musical about a jazz pianist who falls for an aspiring actress in Los Angeles. As you can see, it stars Emma Stone and Ryan Gosling – and JK Simmons is listed in the cast as well.

Two master storytellers combine as Steven Spielberg brings Roald Dahl’s beloved story to the big screen – this time as a live-action film. You can watch the trailer here.

The sequel to what’s arguably the best Pixar movie. Can Dory live up to the greatness of Nemo? We’ll find out in the summer.

Fantastic Beasts and Where to Find Them – November 18

A new film from the pen of JK Rowling, directed by David Yates. Expectations are incredibly high, not least because they’ve cast Oscar winner Eddie Redmayne in the lead.

Will Tom Hanks have yet another Oscar-worthy performance in this true story of the airplane pilot who successfully landed his jumbo jet on the Hudson River in New York? Directed by Clint Eastood, this has a good shot at the Oscars in 2017. 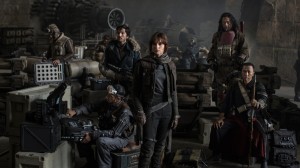 The world’s in the grip of a galaxy far, far away right now. Will it still be the same in a years time? And do fans want to see a spin-off? Felicity Jones and Diego Luna lead the cast of the film which is set before A New Hope and follows a group of resistance fighters who aim to steal the plans for the Death Star.

Chris Pratt and Jennifer Lawrence star in the new film from The Imitation Game director, Morten Tyldum. The story is set on a spacecraft travelling to a distant colony planet and transporting thousands of people when it has a malfunction in one of its sleep chambers. As a result, a single passenger is awakened 60 years early. Faced with the prospect of growing old and dying alone, he eventually decides to wake up a second passenger.

That’s just a few of the films I’m looking forward to enjoying in 2016. What about you?